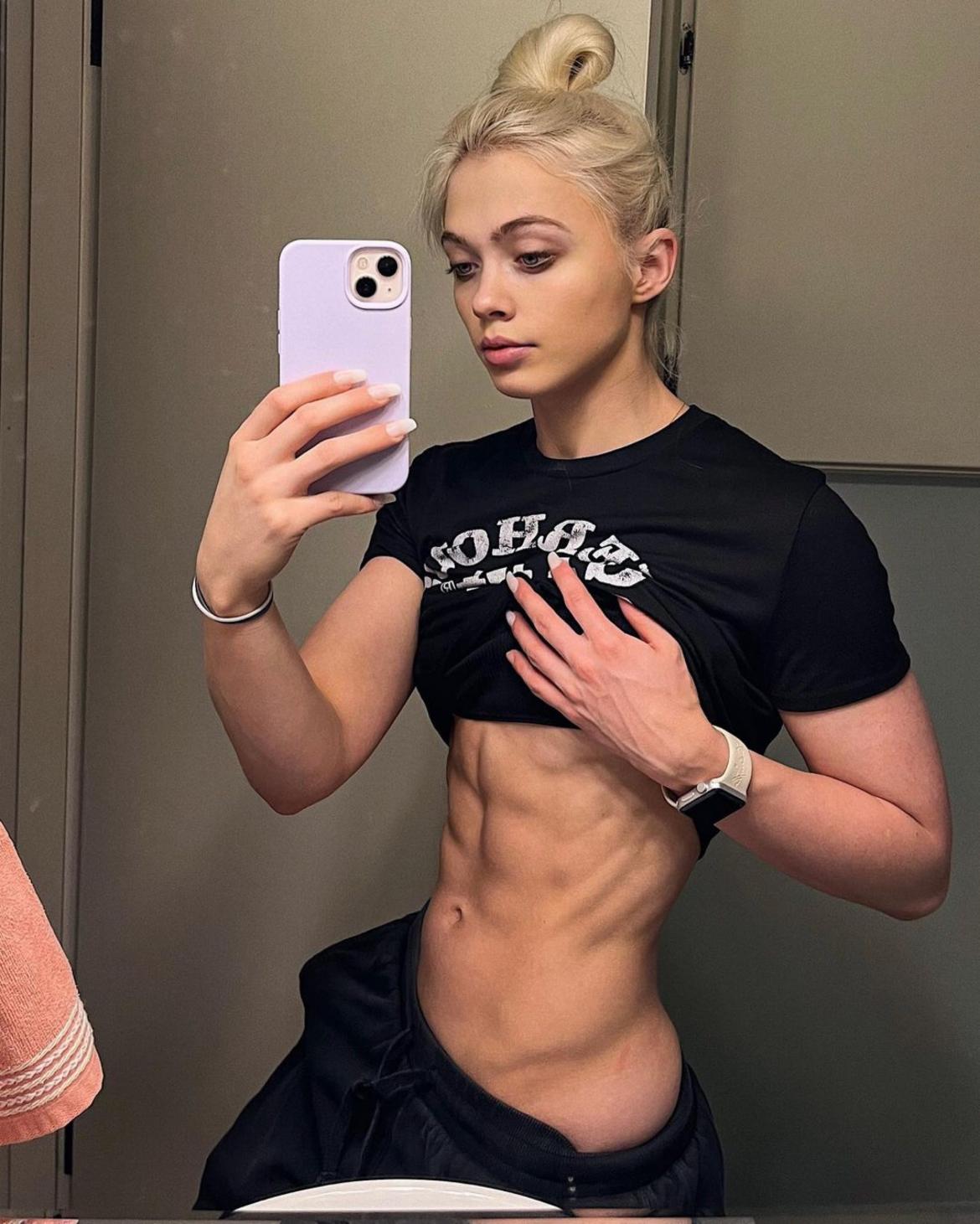 If you’re from Kentuckiana you’d have to be living under a rock to not have seen or heard of NPC Figure Competitor Sarah Hasner. The recent college grad has lit the fitness world on fire with her top notch social posts chronicling her journey in the gym, working with top photographers, and seeing the progression in her physique and overall mindset. Her content focuses on a number of topics that relate to everyday athletes and she’s constantly looking for new ways to interact with her audience. Whether she releases stories, reels, or polls, the goal is to narrow the gap between her and her growing army of faithful followers. In fact, the growth she’s seen is truly something noteworthy. Typically, athletes that have amassed followings of this sort have acquired them from going viral with a post – or – buying them

In Hasner’s case, however, the numbers have been adding up organically. One look at her posts and you see a steady number of views, likes, and comments. These stats illustrate the fact that there’s no foul play afoot. Countless competitors have been caught red-handed buying followers, boosting posts, and getting their accounts shadow banned by various platforms. This is because many wannabe influencers use third party vendors that are flagged by popular apps. These vendors use bot accounts that either don’t have followers and/or don’t have content. If enough of these bot accounts follow an influencer’s account, it raises red flags. If you were to audit Hasner’s posts, the vast majority of followers are legitimate. They’re either fellow competitors, fans of muscle, or verified accounts of folks who may not be into fitness but who are very much real people. Not only is she getting truckloads of likes, but she’s also getting a healthy number of comments as well. The ratio of likes to comments also speaks directly to the authenticity of her following. That said, growing a huge audience in 2022 is harder than ever!

Although there are far more female competitors than males – in both the amateur and pro divisions, the lion’s share of fans are men. Most male fans that follow female competitors want to see what they want to see. Without throwing shade at bikini competitors, there’s a tendency to post endless booty shots, cleavage shots, and otherwise provocative content. This type of posting will garner huge numbers! When it comes to muscular women, however, there’s a tendency to cater to schmoes. Muscle fetishisms is another quick way to blow up when it comes to followers and notoriety.

Many women, in either niche, play along because they don’t see any other way to develop a large fanbase. It creates a situation where objectification is the name of the game. The competitor/influencer goes from being a victim of the times to an active participant in perpetuating the vicious cycle. The “fans” that are gained as a result could care less about the athlete’s journey. They don’t care about what they’ve been through or what their goals are. Fortunately, Sarah’s path to growth isn’t based on gaining fans who see her only for her muscle. Her followers have found their way to her various social media platforms as a result of her journey. They identify with why she got into weight-training and competing. In fact, Hasner says it best.

“I discovered bodybuilding when I was a junior in high school. At first, I wasn’t sold on the sport! I loved working out, but being an introvert, I never saw myself stepping on stage in front of hundreds of people. I first fell in love with powerlifting, but as the years went on, I found myself being drawn more and more to the bodybuilding world. Why? Because of the amount of structure and discipline the sport requires. I loved that it was different from any other sport. I am someone who thrives off a good challenge. And that is what bodybuilding is. It is a challenge of pushing your body to its limits. I am absolutely in love with the close knit community within this sport. Each individual has similar goals which allows us to push each other even if we do not necessarily know them personally.”

Sarah, like many competitors, is goal-driven and doesn’t shy away from hard work and sacrifice. She is focused on putting in the time and effort over the long haul. This isn’t a sport for those looking for instant gratification and she’s well aware that in order to put on quality muscle she needs to do so correctly.

That said, for many looking to grow huge followings there’s absolutely no desire to compete. They don’t want to work tirelessly in order to gain the approval of a panel of strangers who will judge them, critique them, and ultimately tell them what they need to do in order to win and move onto higher levels of competition. Placings don’t have any sort of impact on social media followings. If they did, mainstream people would be lining up to attend bodybuilding shows and contests would be televised left, right, and center. The truth of the matter is that competing costs a great deal of money and the prospects of earning a living from it are pretty slim to none. And while it’s true that competitors’ physiques will get thoroughly scrutinized by the judges, many of those who take the stage do so with a greater sense of purpose. There’s a lot more going on than meets the eye. So why does she do it?

“I competed in my first show, the Kentucky Derby, at the age of 19. I was the youngest and smallest girl out there. That first show lit a fire in me. I will be stepping on stage for the first time in over 2 years this coming August and I am stoked. Each year is a new year to be better. I am looking forward to the many years ahead as I continue my growth in this sport.”

The fact of the matter is that Sarah’s whole approach centers on personal growth. Don’t try to figure her out because of her age. Don’t think you know her because of her muscles either. The truth is there’s a lot more to her and you can get a sense of it by following her on social media. This is primarily why I think she’s experienced the greatest amount of success thus far. She’s being herself in a world full of people looking to copy others. Her content is a breath of fresh air.

She’s not just comfortable in her own skin, but she wants to share her journey and experiences with others. This is why I think Sarah has linked up with some great companies that see the undeniable potential she possesses. I tend to agree. To be honest, competing is just a small part of what she’s got going. In addition to that, she has a knack for knowing how to create timeless content. While she’s worked with talented photographers and videographers, she knows how to put out thought-provoking DIY content that gets a reaction from her following.

Sure, it’s great to have pro shots and pro video, but if an influencer is able to produce top notch content using only their own phone, then you know you’re dealing with real talent. When asked what tips she could impart to those looking to make their mark, here’s what Sarah shared:

– Be authentic with your posts. You want your followers to be able to connect with you

– Being Consistent with posts / stories. The more you post, the more you are exposing yourself on people’s feeds. People like someone who constantly posts because it gives them something to look forward to when they hop on social media

– Engage with your followers. Create polls, Q&A’s, quizzes to create engagement between you and your followers. Respond to DM’s and comments ( as long as they aren’t weird)! In doing so, you are able to get to know what your followers like or dislike.

– Using Hashtags. Hashtags expand your reach aside from the people already following you.  They allow social media users to search for content that they like with the hopes that your picture will catch their eye.

All in all, I think the future looks very bright for Kentuckiana’s Sarah Hasner. I think she’ll do great things on-and-off the stage, but I think she’ll make her greatest impact on social media. Eventually, I could see her doing far more press, as well as motivational speaking, writing e-books, and possibly even making the transition to larger more mainstream formats. I think with the renewed interest in muscular women in the fitness industry today, we could see someone like Sarah develop a very large audience which could be parlayed to the point where she could gain a significant segment of followers outside of the fitness industry. Whether you want to call that crossover appeal or mainstream reach, it’s the path to becoming a formidable celebrity and that’s just what I think Sarah Hasner will be. She has a great deal to offer and I think she’s just getting started!!