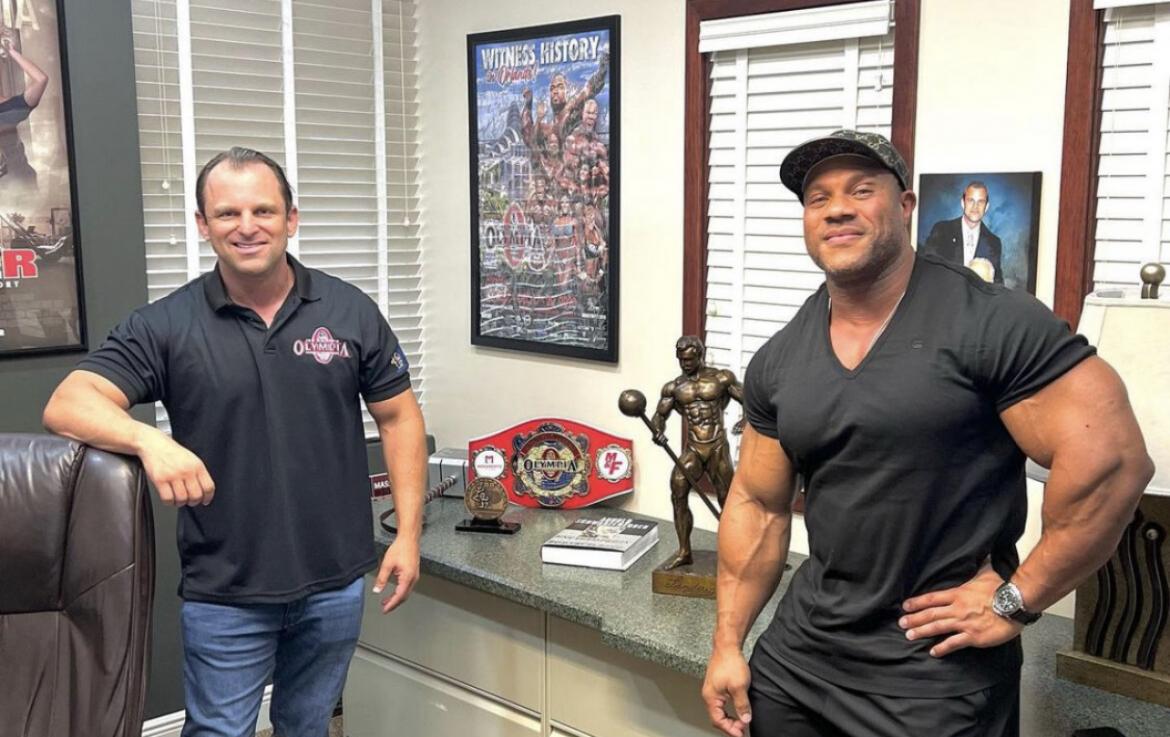 At this point there are greater chances of a Skid Row reunion than of seeing Athleticon actually happen but if it did there’s growing speculation that 7x Mr. Olympia Phil “The Gift” Heath would use it as his last hoorah. This competition would provide the former champ with his first title since being toppled by the late great Shawn “Flexatron” Rhoden at the 2018 Olympia. The contest would also provide him the greatest amount of press since it’s put on by The Rock and Phiil is managed by Dany Garcia. If there’s any doubt with regards to getting a fair shake at the Olympia, there would be no concerns at Athleticon / Icon World Classic.

I personally don’t think anyone’s out to get Phil and I believe he was judged very generously at the 2020 Olympia where he took an impressive 3rd behind Big Ramy and Brandon Curry. That said I don’t think a return to the Olympia in 2022 would result in another Top 3 finish. Although I’ve been very critical of the 7x Mr. O I think I’m being realistic when I say that he might place out of Top 6 given the quality of the next generation of bodybuilders currently battling for the highest placings in the sport. A similar argument could be made for the Arnold Classic. The ASC also commands the best talent in bodybuilding. Just this year it was won by a former ASC champ and Mr. Olympia in Brandon Curry. Assuming Phil had been in the lineup at 100% (like he was at the 2020 Olympia), there’s just no way he would have edged out either Brandon or William “The Conqueror” Bonac. Fortunately he didn’t enter.

One thing that I really admire in Heath is that he’s protected his legacy as a living legend. I applauded him for his return to the Olympia stage in 2020 and thought he looked fantastic! I was happy with his placement and I must admit I started becoming a fan of his again. He was big, conditioned, and posed hard. He showed great sportsmanship on stage and he was a good sport when it became clear he wasn’t going to win or be runner-up. He gave the audience a great show and he continued to be the kind of ambassador for bodybuilding that the sport needed after the contest. This was the Phil Heath I knew in the late 2000’s and the Phil Heath I loved for the first couple years of his reign. That said the 2020 Olympia could have very well been a one-off. It could and probably should be the champ’s last hoorah. The fans, however, will always want more. We don’t like seeing our favorite bodybuilders retire.

Whenever the fans see a top bodybuilder from yesteryear meet with Chief Olympia Officer Dan Solomon it’s like they can’t help themselves. These meetings always trigger a boatload of reactions.

The fans start piecing together entire dialogues about what the two icons in our industry discussed and that’s probably one of Dan’s desired outcomes by posting the photos. That’s right my friends. These shots don’t get leaked – Dan often puts them out himself. This is because he’s a marketing genius and a lifelong bodybuilding enthusiast. He knows the fans like he knows the industry. He knows the sport like he knows the back of his hand. We’re a passionate bunch who identify with our favorite athletes. It’s a degree of loyalty greater than that of mainstream people with major league sports. It’s one of the things you can only have with a niche sport such as ours. People might be loud and boisterous when arguing about which MLB team they like more but people could come to blows when fighting over who their favorite bodybuilders. I’ve lost friendships over being overly critical of some bodybuilders and I gotta say I love it. I love that we’re so invested in supporting the people in the sport we identify with most. And not that it needs to be said, but I’ll say it, Phil has a huge army of supporters and they’d like nothing more than to see Phil return triumphant, wiping the floor with Big Ramy, tying Haney and Coleman, and going for nine.

Although it’s highly unlikely that Phil will compete again, let alone defeat Big Ramy, so long as there remains a chance – he will continue to reap the benefits. If he was fat and out of shape in the photos with Dan, you probably wouldn’t be reading this article. The fact he’s muscular, streamlined, and holding onto quality size makes for a better conversation. After all, there is a retired big-look and a retired downsized-look. I’d say Jay Cutler has nailed the former, while Dexter Jackson has opted for the former. Both past Olympia champions have embraced retirement and are enjoying the next chapters of their careers. Although Kai Greene is not a Mr. O on paper he’s considered an uncrowned champion and like Phil continues to walk around with an Olympia-quality physique without any plans of returning to the stage. That said Phil can’t be boxed in with The Predator because Phil did actually return and looked very, very good. Why didn’t Phil compete again in 2021 though?

That’s a question many Heath fans have wrestled with. The guy looked spectacular in 2020 and who’s to say if he had used that as motivation for the next year, that he couldn’t have reclaimed his title? You all know that I believe Brandon beat Ramy in 2021. The champ was bloated, made no improvements, and was struggling badly in the prejudging. In 2020, Phil was very competitive with Brandon and even won some poses. Had he brought a similar but improved look to the 2021 contest and given how great Brandon looked, I think Ramy would have stuck out like a sore thumb. It also would’ve been that much harder to have given The Egyptian Phenom the win, had there been two more conditioned, aesthetically-pleasing Mr. Olympias flanking him. 2021 could’ve had a completely different outcome had Phil been in the mix.

The fact is Phil was more than likely done in 2020. He shut up a lot of critics – myself included – but with 7 in the bag and an ASC title to boot, what more is there. Phil even has an Ironman title from way back when. In fact, that’s the show that more or less put him on the map. When he defeated The Freakin Rican 2x Mr. Olympia 2nd Runner-up Gustavo Badell that’s when everyone in the industry started to see what Jay had seen years prior. That was that Holy Fuck moment when people saw the future before their eyes. When Phil beat Gustavo it became a foregone conclusion he was going to be Mr. Olympia.

Back then he was one of the nicest, most down to Earth people in bodybuilding. It just so happened that he was also the best. And for that 2020 contest I saw a lot of the qualities in Phil that I first saw back in 2007. Why he didn’t use 2020 as motivation for 2021 is beyond me. If anything it only serves to prove my point. He’s retired. Competition has given him everything it could.

But would Phil do Athleticon? I think the better question is will Athleticon ever happen? I think that’s the bigger if. That said, if it ever did happen, then I think we could see Heath throw his hat into the ring. The decision might be based on the one last hoorah concept but it might also be based on the fact he has longstanding business ties to Dany Garcia and The Rock. They have shown him a great deal of support and they will likely be key business partners in his documentary and future business endeavors. Him doing their contest would add incredible credibility to it, not to mention significantly increase ticket sales and Pay Per View numbers.

Phil competing in Athleticon would also sweeten the deal for vendors digging deep into their pockets for booths at a first-ever event. Shrewd businesspeople aren’t going to pay Arnold and Olympia prices for a first-year event. Not only that, but keen entrepreneurs will need assurances that a show that’s been canceled and postponed as much as Athleticon has is worth taking the chance. Having Phil Heath locked in as a competitor helps alleviate some of those concerns. Therefore his conditional comeback wouldn’t be based solely on reclaiming past glory as much as it would be to back up good friends.

Then again maybe I’m wrong. I’d love to be wrong about a Phil Heath comeback because I still think he’s got plenty of gas in the tank and I still think he could make some good money and snag a few more titles. He’d have to be strategic and pick contests with 2nd and 3rd callout competitors but he could do it. I mean listen, he could totally hang with Olympia Top 6 guys and hold his own, but why not pick easier shows and win?

In the end, he’s always going to be a 7x Mr. O but that too speaks to why he probably wouldn’t be interested in low hanging fruit. What’s winning a few $10k shows going to do for a guy who ruled the sport of bodybuilding for eight years? I’d even count the year he lost because up until the moment he was announced 2nd, the world thought he’d be announced 1st. Even at the 2018 Olympia press conference, Phil was in complete control. And he had public opinion wrapped around his finger. To go from that commanding presence to winning rinky dink shows just doesn’t seem like something that would interest any former Mr. Olympia. Nonetheless, we could probably sit here forever and a day speculating as to Phil’s next move. Only time will tell.

I say Phil’s done. What say you?