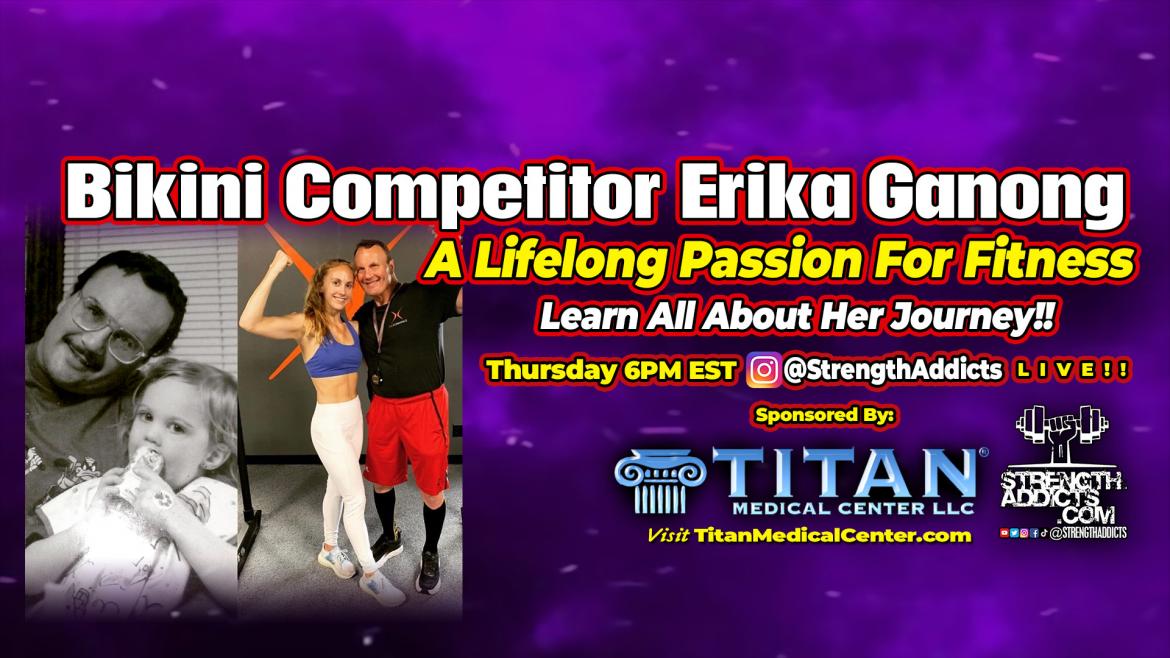 This was one of the most powerful interviews I’ve done in a very long time at StrengthAddicts. Erika is a remarkable athlete who absolutely loves competing in Bikini and is an avid strength-based lifter as well. Her significant other is also a competitor, handling all of her nutrition, and her father is a former University of Louisville Strength Coach who oversees all of her training. This interview covered a lot of ground, including a nonprofit organization co-run by Erika.

We discussed how she’s been able to train despite substantial limitations on her training due to her neurological condition and how instrumental her dad has been. They have found ways for her to both stimulate the various leg muscles needed to build a top notch Bikini physique but not taking a toll on her health. This is where thinking outside the box really comes into play. Is it harder? Of course! Would it be easier to quit? Absolutely! But there’s no quit in this girl!

This is a must-watch interview for any number of competitors who may be dealing with health concerns which they think might sideline them from competing. Whether the issue is health-based, nutrition-based, or psychological I’m not here to say you can compete, rather, maybe watch or listen to this interview and possibly reevaluate.

For example, Erika doesn’t do squats and she may not even do leg presses, yet she’s built stage-quality glutes and hamstrings. She may not be able to drop down as low in bodyfat percentages as her fellow competitors yet she comes in more dialed-in than most. How does she do that? Again, it’s not easy and it’s probably not achieved as conventionally as it is for others, but Erika and her team are able to find ALTERNATIVE WAYS to get to the same goal as everyone else. And not just look like everyone else – but stand out! If she can do it, MAYBE, you can too!

We also covered the heartbreak of the pandemic, when contests were being postponed and outright canceled! For many these days are a distant memory but it happened! Imagine prepping for 12-16 weeks and then out of nowhere – your show is canceled! Who can forget the poor competitors at the 2020 Arnold Classic Amateur? They went to bed the night before the show of their lives – uncertain if it would even happen! Imagine prepping all that time and flying from other continents only find out there’s no contest! Nonetheless, Erika didn’t miss a workout!

We discussed backyard training sessions using kitty litter for weight and relying on bands and other household items to get her training in. We mustn’t forget how chaotic those times were. And while many opted to take a break, Erika kept going!

If you haven’t checked out this great interview, I highly encourage you to!