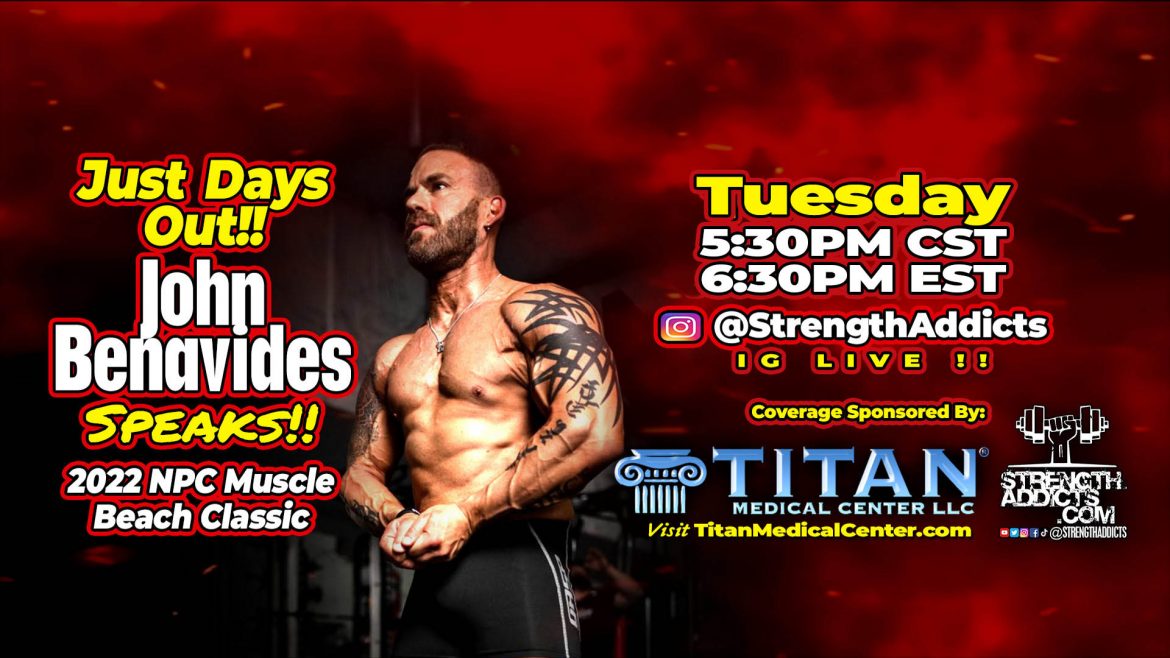 A lot of people associate contest prep with suffering and don’t get me wrong – you will suffer – but when you have a true sense of purpose as John Benavides had for the 2022 NPC Muscle Beach Classic I think it stands out. How though? Well, John was not only able to get to 3.5% body fat a week out from the contest, he was also able to get himself ready for an interview where he didn’t know what questions were going to be asked, and he was able to execute flawlessly. While we are friends and we have done an interview like this before, he still had no way of knowing what I’d ask.

If you go by the status quo perception of contest prep, John should have been half-dead during the time this interview was conducted. Many people – both within the sport and outside of it – feel that peak weak is a time when competitors are in a mental funk. Peak week, or hell weak, is a time when most competitors run themselves through extreme suffering. John and his team, which consists of his coach and nutritionist, did it differently. In fact, one would think that they gradually tightened the macros so as to not expose John to less stress during the final week but Benavides actually reached 3.5% body fat without any substantial caloric deprivations. It was one of those preps that was simply perfect.

Where StrengthAddicts differs from the vast majority of other news and commentary sites is that I don’t have the faintest idea where John placed at his show. It’s not that I don’t care, but my definition of a great prep is feeling and looking your best. Where you place is something reserved for the competitor. Maybe he wanted to be nationally qualified, maybe he wanted that show’s title, and/or maybe he wanted to go pro. Those are all valid goals, but as far as I’m concerned John won at the time we did our interview. He absolutely nailed his prep and he fully articulated his insights and gave a fantastic interview!

If you missed it, I highly encourage you to check it out! If you’re a competitor you will definitely enjoy it!