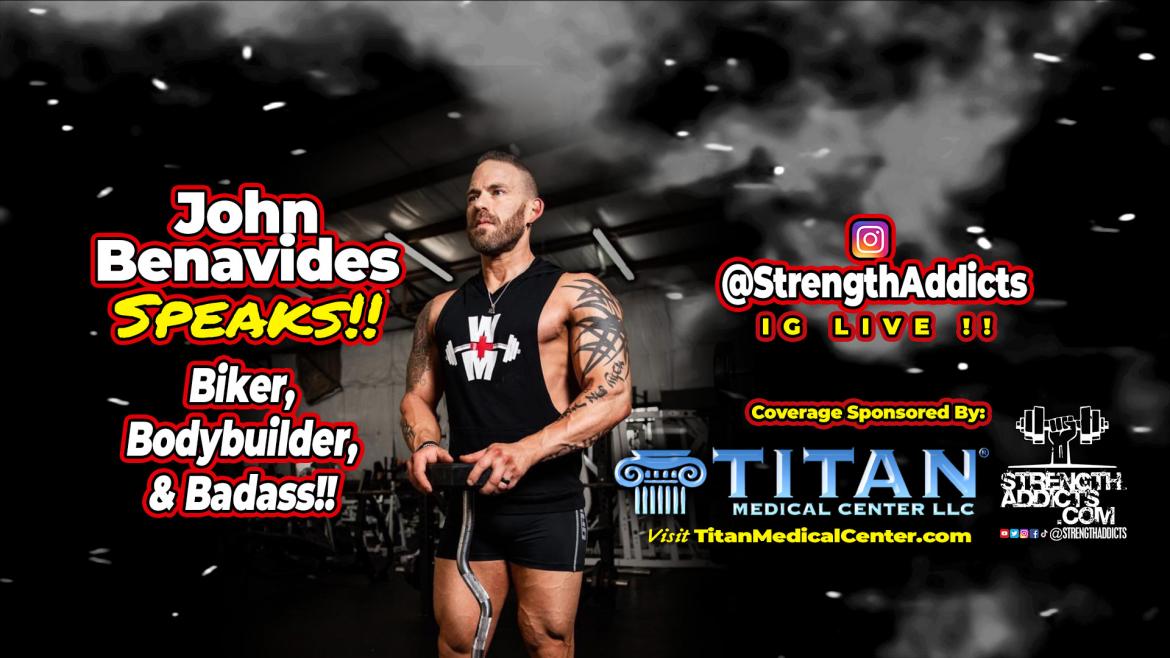 John Benavides wasn’t always jacked and shredded; in fact, he struggled with being overweight and he had to give his all to getting in the shape of his life. Between working out and eating clean, he’s embarked on a journey that requires substantial amounts of time, ironclad discipline, and perhaps, above all else, a great deal of patience. People with John’s level of commitment, know, that the work is never done. It’s all about continuous self-improvement and self-reflection. But he’s grown far more than just physically. In his interview for @StrengthAddicts IGTV, Benavides spoke about how he’s been able to grow as a person. Between bodybuilding and his 8+years as a member of an MC (motorcycle club), he’s been able to network with people, establish relationships, and really feel comfortable in his own skin.

In addition to personal growth and building a great physique, John sets a great example for others in their 30’s, 40’s, and beyond, who want to embrace physique-based sports. As a career professional, husband, father, MC member and competitor, he makes the time to get everything done. He’s a perfect example of where there’s a will, there’s a way. After all, so many people are under the preconceived notion that only college kids have the time and ability to compete. Anyone can – the question is, how badly do you want it?

One of the gems of the interview is when we discussed GASP Clothing. There was a time when John didn’t think he belonged, he loved the guys who represented the company, most notably Branch Warren, but his physique wasn’t where he thought it needed to be, to be a part of the squad. Over time, he worked hard to get to that point, he did contests, and now you see him repping GASP all over social media. And they’ve noticed!

Whereas some, shortsighted companies, are hung up on how many followers you have, companies like GASP are impressed with how real you are – and John is definitely that! He doesn’t rep a bunch of companies; he’s not about that. You’ll see him rockin GASP clothing and using Blackstone Labs supplements. And that’s it. Just like he said on his interview, he’s not looking to shill for companies, he’s not looking for favors, and he’s not looking for freebies. He’d never lend himself out for that kind of thing. That said, he believes to his core in GASP and Blackstone, and as a result, both companies have shown their gratitude.

John Benavides is the real deal. When I stopped leading up the Legion, his support didn’t fade away. He’s always been a friend and he’s the kind of person who I can count on. That’s saying a lot because we’ve never met, much less hung out or lifted or anything, but I wouldn’t think twice about confiding in him or counting on him. John is precisely the caliber of person that PJ wants in the Legion. If you told me I could have 10 JB’s or 1,000 random followers, I’d pick 10 guys like John any day. I’d pick 10 guys like John over 10,000 followers. This is where a lot of people – and especially a lot of companies – get it all wrong. Seas and seas of no-name people, inactive accounts, and bought-and-paid-for bots aren’t going to do anything for your brand. Perhaps the single most important factor in building a movement, is creating/maintaining a community. People in the Legion are a real family and I can’t thank PJ enough, for having picked me to run it.

All in all, I can’t say enough good things about John and/or his interview. I strongly recommend everyone watch it, share it, and if possible hit the Like button and leave some comments. I’d like to thank John for taking the time and hope you all check it out! Enjoy!