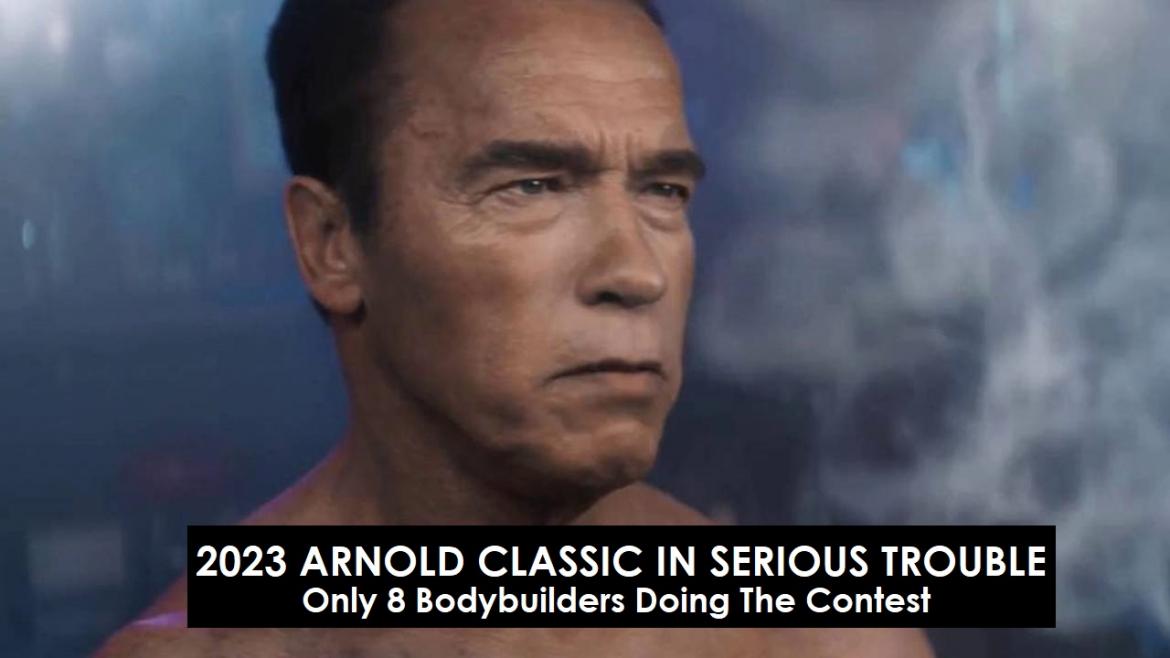 With just 8 total bodybuilders confirmed for the 2023 Arnold Classic, “promoter” Arnold Schwarzenegger can’t be happy. I find it hard calling someone who does little to no work a promoter; however, this is the contest that carries his name. Everyone associates the contest, the expo, and all the marketing with The Oak. It’s his show even if for much of the show’s history it was the late great Jim Lorimer who was responsible for the planning, day-to-day operations, and execution. Jim relied heavily on the Lorz Family, Mike Davies, and others who were instrumental in getting the behind the scenes work done. As of the last few years Jim was in semi-retirement. He passed away recently. And as of last year, The Oak entrusted what Jim and The Lorz were doing to new people. And while last year’s Arnold was hardly anything to write home about, 2023 is shaping up to be a complete failure.

The fact is The Arnold has a payday of $200,000 but has only drawn out 8 guys. 2 of those guys – or 25% of the roster – consists of 212 guys. They are 212 Mr. Olympia Kamal Elgargny and 2x reigning 212 Mr. Olympia Shaun Clarida. And that’s ironic because these guys represent the very best of a division that Arnold and his camp cut from its production with the retirement of James “Flex” Lewis and Jose Raymond. The fact two 212 guys have a real shot of winning the open make the ASC’s decision to do away with the 212 division seem all the more ridiculous. Adding more to the ridiculousness, only 1 of the 8 guys doing this year’s open placed in the Top 6 at the 2022 Mr. Olympia. While William Bonac has placed has high as 2nd at the O and is a previous Arnold champion, he was out of the Top 6 at the recent Olympia.

The fact that there are still 10k shows on the IFBB Pro League circuit and that 10k shows draw out more talent than what the Arnold is getting in 2023 is shameful to The Oak and his entire team. When you figure that contests paying 90-95% less can get better guys that’s definitely cause for concern. Arnold may be loaded, but no one likes to lose money and look stupid. Whereas the Olympia is growing, it seems the Arnold is dying.

In fact, just a few weeks ago the 2023 NPC Arnold Amateur was indefinitely postponed and within a week it was back on. It was said they couldn’t get enough competitors, but the decision to shelve it also happened to be released on the same day as another Washington Post headline story on bodybuilding was published. Coincidence? Maybe, maybe not, but I made a big deal of it. Of course once it was put back on, countless folks said I didn’t know what I was talking about. Well…, here we are two months out from the Arnold Classic and they only have 8 pro’s doing Open Bodybuilding. What’s even a worse look and shows the true nature of desperation going around is that everyone from Jay Cutler to Nick Trigili are imploring bodybuilders to sign up. If we keep going at this rate, the pleads may turn into all-out-begging.

You’d think everyone would be pounding on the door for an invite to a $200k show, but it seems no one cares. The money’s right, the venue is great, and the city is great. So where’s the problem? I’d have to say it falls on Arnold and his team. Sorry, but not sorry.