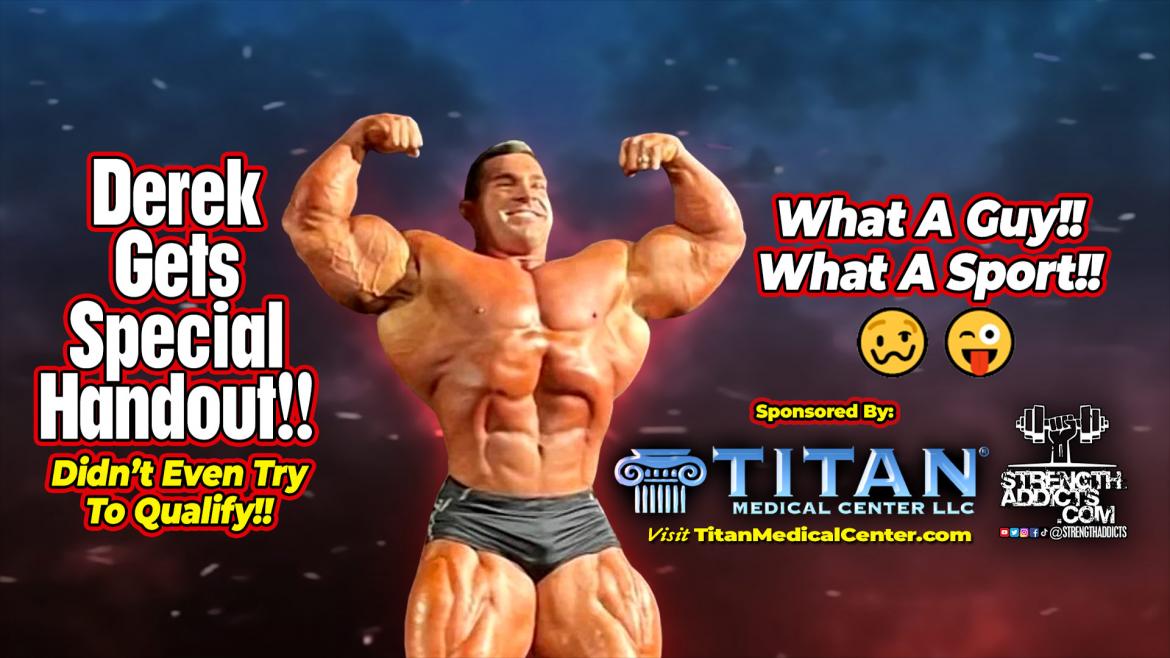 212 Mr. Olympia Derek Lunsford was offered and accepted a special invite to the 2022 Mr. Olympia. Not only didn’t he qualify, he didn’t even compete in an open contest. Worst yet, he didn’t prep for an open contest. Lunsford just trained, ate good, and made Tiktok videos. My guess is he was probably tipped off in PIttsburgh and told to keep his mouth shut. If that’s the case he played the part very well. If that wasn’t the case, then the confidence he relied upon was something quite noteworthy. The fact that the official statement disclosed that the special invite intended for Flex Lewis was given to Derek Lunsford is also quite noteworthy. The reality of the matter is that The Welsh Dragon wanted to compete this year. He was injury-free, healthy, and ready to commit. After waiting longer than even I expected him to and not getting final confirmation, the winningest 212 pro, officially retired. While I’m not a fan of the special invite I believe someone of Lewis’ standing warrants it. But why does Derek?

Lunsford is 29 years of age and has had one of the brightest careers in bodybuilding. The year he won the USA’s, he won his first pro show, and went on to take Top 5 at that year’s 212 Olympia. After a few years of hit and misses, he ended up winning the top title in the 212. But what did he do to grow the division? Did he work tirelessly during his single year like Kamal or Shaun? Did he make any attempt to create buzz for the 2022 event? No. He got huge and has spent the better part of the year teasing fans his alleged indecision. The lighter division has taken some substantial hits. From being dropped by the Arnold to seeing many of its champions cross over to the open because the money and exposure is far superior. If Derek had made the 212 his home like the great James “Flex” Lewis he could have turned the tide. Instead the reigning champion simply used the division as a stepping stone to getting where he really wanted to be. Lunsford did nothing for The 212 expect further diminish its significance.

I have long been a critic of the special invite as a practice. In years past it’s been given to competitors who fell victim to the times (pandemics, visa issues, military service), but never has it been given to someone who didn’t try to qualify. Although I wasn’t thrilled when Big Ramy got the special invite in 2020, he at least had done that year’s Arnold Classic and was actively prepping for another contest. Other sports have ways to get to their biggest events also. For example, the NFL has wildcards, but that’s still linked to actual athletic performance and rankings. Giving Derek Lunsford the special invite is akin to the NFL letting a team play at the Super Bowl even though they hadn’t a game in the season. That would never happen, but in bodybuilding no one bats an eyelash at it. And that’s why this will always be a niche sport.

With regards to the athletes no can tell me that they don’t notice. Imagine how IFBB Pros who’ve had to fight and suffer to earn their way feel? Some of them won shows. It was a milestone in their bodybuilding careers and it guaranteed they’d be able to be an Olympian. Derek didn’t win shit and he’ll be there. Imagine the guys who’ve had to compete in multiple contests. They haven’t had the good fortune of having their hand held high and crowned the best of the best. Instead, they have to suffer and fight, show after show, hoping they accumulate enough points to get the nod. Imagine them having to prep and pick other shows to do, meanwhile Lunsford sits on his ass, eating good food, and killing time on social media waiting for the phone to ring.

I don’t care how much camaraderie there is, no one is going to tell me that Derek getting a freebie to the O sits well with all the guys who actually earned their spot. And after Big Ramy in 2020, it may not just be a spot, Derek might actually win. Could you imagine if he won the Olympia and hadn’t even PREPPED for an open show in the 2022 season? Big Ramy looked like trash in 2021 and retained the title. There’s absolutely nothing that prevents Lunsford from winning. If Ramy is off again and no matter how great Brandon is (you know he won’t win again) and Hany has an oil spill, it’s possible Lunsford gets it.

I still think Ramy missing the Pittsburgh Pro and waiting ten days to publish that half-hearted bullshit explanation will cost him. Top bodybuilders never miss that show, but for the reigning Mr. O to have done it, that’s might be the straw that breaks the camels back. Moreover the brand may prefer the idea of an American, native English-speaking, young and personable champion. After all, the Olympia is a business, and who would make the venture more money? Honestly. Ramy or Lunsford? Ramy’s size and freakiness has already been rewarded with two titles. Some might say he’s tapped out. Others might say certain folks have grown tired of him. Perhaps Lunsford getting the invite is just the tip of the iceberg. If it goes down to the wire and it’s Ramy and Lunsford waiting for Bob Cicherillo to make the announcement – Ramy’s reign is OVER.

The more I think about it, the more I’m starting to think Lunsford will win the 2022 Mr. Olympia. Hany Rambod has been the guy behind multiple year champions, most recently Phil Heath and Jeremy Buendia. And ever since Derek went to him, his career has totally changed. Also, much like Brandon will never be allowed to win again, no matter how amazing he looks, I also highly doubt that we will ever have an Iranian Mr. Olympia. At some point Hadi will probably break with Rambod. Maybe it won’t be a bad break like with Jeremy, but at some point Choopan will tire of 3rd being the best he’ll ever get. He’ll probably try his hand with different coaches, but he’ll never be Mr. O. Lunsford, on the other hand, has all the making of the Pro League’s boy wonder.

Don’t be surprised if Derek Lunsford is your 2022 Mr. Olympia. It might be great entertainment and sell a lot of tickets, but it’ll significantly water down the competitiveness of the Olympia as truly being the stage where the best bodybuilder in the world is chosen.