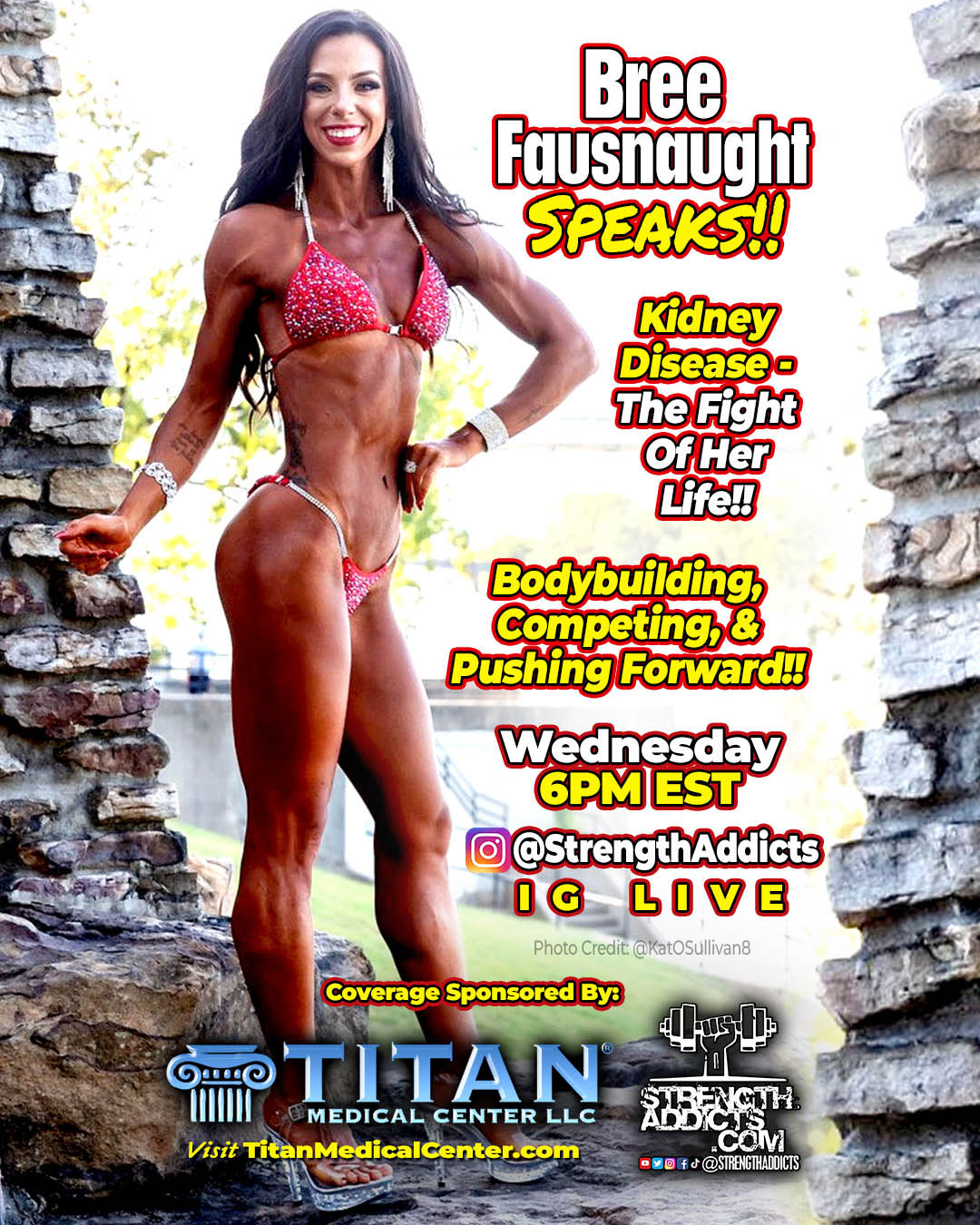 To say I’m excited to interview Bree for StrengthAddicts IG LIVE would be quite the understatement. Hers is a story of defying the odds and pressing on no matter what doctors say, no matter what others say, it’s all about putting one step in front of the other and conquering adversity. The power of the mind is unparalleled and when someone is physically and mentally fit there’s really nothing they can’t accomplish. Words alone just don’t cut it. Everything I’ve written thus far would make make for a pretty decent pep talk but Bree has lived it. It’s more than talk. She’s proof positive that anything – and I mean ANYTHING – can be accomplished. I’m super excited to ask her about her journey and her goals, but more than anything I want to listen. I want her to expound on what she’s shared for his press release.

I’d also like to commend Bree on taking the initiative to promote her appearance as zealously as she has. I always give my guests the promo materials and I’m happy whenever they post a story or mention their appearance, but Bree really took it to another level. She made a story and a post and really got behind it. I couldn’t have asked for more and I know the interview will be fantastic. I also want to thank her for taking the time to give me – and us – some great insights into her life beforehand. This article will give viewers a sneak peak into her journey, her trials and tribulations, and what she’s all about. Once the interview is up, I’ll be sure to write a follow-up article, which will also include the interview on YouTube. My hope is that more outlets take the time to interview her and feature this wonderful human being and athlete.

Below you will find a great bio from Bree. Be sure to read it thoroughly and try to tune in for the IG LIVE at StrengthAddicts on Wednesday, September 14th, at 6PM EST. If you’re unable to watch program live, don’t worry!! It’ll be available – in its entirety – at the Official StrengthAddicts YouTube channel. All coverage is powered by Titan Medical Center – your go to source for the BEST therapies! Whether you’re looking for hormonal optimization, medical weight loss, hair/skin/nails or anti-aging, visit Titan Medical!!

Ever since I was a little girl, I knew I was different. I never quite fit in and I’ve always marched to the beat of my own, very loud drum.

I started competing in dance and pageants at a young age, in the south, it’s kind of a right of passage. But it wasn’t until I found bodybuilding, that I realized my true calling as a competitor.

I began competing because I loved the sparkly suits and getting to play dress up. But I had no idea in the beginning for how much of an impact it would have on my life. I competed for three seasons straight, ultimately going to NPC USA’s in December of 2020.

Those three seasons prepared for for what was next – the ultimate fight of my life, Kidney Disease.

After competing at USA’s, I expected my body bounce back, but after a month, it was apparent that that wasn’t going to happen. My health started to rapidly deteriorate and I lost vision in my eyes before I decided something was wrong.

I showed up at the hospital expecting a shot and to be sent on my way. What happened next was something that can only be described as a nightmare.

I spent the next 2 weeks in the hospital where I was ultimately told that I was in complete Kidney Failure. Then it happened, the word I will never forget: TRANSPLANT. Me?! A 33 year old, otherwise healthy athlete needed a Kidney Transplant to survive.

Those days were a stressful, surreal blur. Why? How? I spent countless hours beating myself up as if I had done something to deserve this. Those were some of the darkest days of my entire life. I was told that I shouldn’t workout anymore and I definitely wouldn’t ever be able to compete again.

But if there’s one thing to know about me, it’s that I’m determined to do what others say is impossible.

I made friends with the nurses in my unit and they often let me sneak out of my room to go on “walks” – my walks were lunge passes down the hospital hallways and squats in the elevators. Once released, I got to work in the gym. I showed up for myself every single day, trusting the process and more importantly, trusting myself. Little big little, I started to gain back a sense of who I was, everyday, getting 1% closer.

Here is sit today, just shy of 7 weeks out from competing again for the first time since my diagnosis. It will also be the first time I’ve competed with a dialysis tube coming out of my stomach as well. I’d be lying if I said I wasn’t a little nervous about what people will think. But will it stop me? No! I believe I was out on this earth for a purpose and that purpose is to inspire others to become the greatest versions of themselves even through adversity. I’m here to prove that no matter what, the human spirit can achieve anything as long as you believe in yourself. Call me corny, but if I impact just once person to go after their dreams, my goal has been achieved.