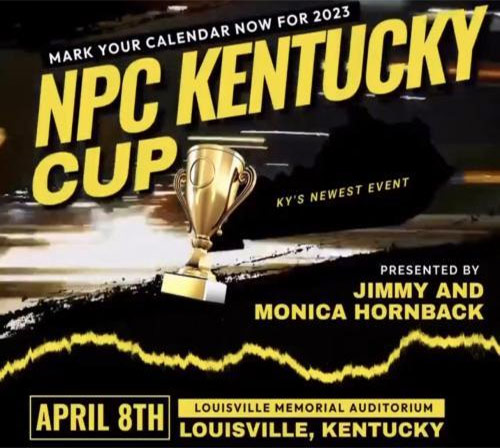 Breaking news from Louisville, KY, as NPC Head Judge Jimmy Hornback and his wife IFBB Women’s Physique Pro Monica Hornback were announced as the promoters of the brand new 2023 NPC Kentucky Cup. The contest is set for April 8th, less than one from the Kentucky Derby and the bodybuilding contest affiliated with Derby. Brent Jones, who promoted the two NPC sanctioned Louisville events, resigned two weeks ago ahead of a media and legal crisis which has rocked the bodybuilding world. Jones, who retains contractual rights with the Kentucky Derby and also owns the Kentucky Muscle contest, is expected to make a formal announcement on the future of his contests. By positioning the Kentucky Cup a month prior to Jones’ 2023 Kentucky Derby Festival Classic, the thinking might be that by the time Brent runs his show in early May, most Kentuckiana competitors will be starting their preps for summer and/or fall contests, thus skipping his.

Greater Louisville is home to both Hornback and Jones. They have collaborated for many years and I believe there is strong mutual respect between the two, even in the face of a breakdown of communication.

Having Jimmy and Monica as promoters of the NPC Kentucky Cup makes all the sense in the world as the two Greater Louisville natives know the area well and have developed important contacts throughout their work with the NPC and the IFBB Pro League. They’re both very competent and trusted. What’s a little odd, however, is that OCB Kentucky clued StrengthAddicts into an Instagram post by Gary Udit, NPC Mid Atlantic Zone Chairman, where he applauds the new event and promoters Monica Hornback, Jimmy Hornback, and Rick Bayardi. Bayardi is Udit’s right hand man, and the state chair of Kentucky and other states. His exact power, if any, is debatable.

It’s very interesting – and misleading – that contest promotions make it seem as if The Hornback’s are the sole promoters of the new show NPC Louisville contest, but that in reality Rick Bayardi is a promoter. Why would the name of a co-promoter be omitted?